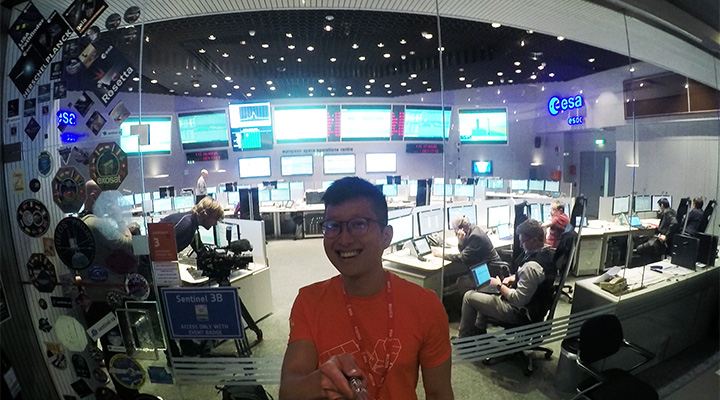 By Xu Teo, Client Services.
25 April 2018, 2032 CEST
Darmstadt, Germany
European Space Operations Centre (ESOC)
We were in the Press Centre, on our feet, cheering, clapping, exchanging handshakes, some possibly even on the verge of tears. There were equally ecstatic scenes in the Mission Control Room (MCR) as Sentinel-3A’s identical twin sister, Sentinel-3B, “called home” upon reaching orbit. The Acquisition of Signal (AoS) was successfully received after the satellite had earlier been propelled into space on a Rocket launcher from Plesetsk Cosmodrome in Russia.
Although  the mission was primarily to monitor the oceans, the satellite will also be able to provide data for atmospheric and land applications. To achieve this, the satellite will utilise a suite of sensors on-board such as the Sea and Land Surface Temperature Radiometer (SLSTR), Ocean and Land Colour Instrument (OLCI), SAR Altimeter (SRAL) and Microwave Radiometer (MWR). Sentinel-3B’s launch also means that acquisition swath gaps left by her twin sister (Sentinel-3A) will now be eradicated and revisit times will be reduced to 1-2 days from 3-4 days, improving the timeliness of data. 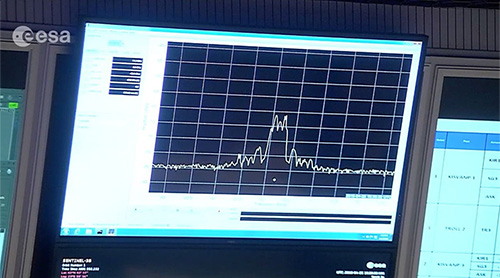 These instruments will aid in observations such as measuring sea-surface height, ocean and land surface temperature and colour, land-use change, forest cover mapping and fire detection, to name a few. Visit ESA’s missions webpage for more information about the Sentinel-3 missions.
You can also access the Sentinel-3B first data sets already!
I was lucky enough to be selected as one of the 20 ‘Sentinerds’ to visit ESA’s Space Operations Centre in Darmstadt, Germany to witness the of launch Sentinel-3B as part of the Social Space event. The Social Space events were initiated in 2011 by ESA and DLR to “broaden the agencies’ overall use of social media to engage with new audiences, including the media, the blogosphere and a wider spectrum of those passionate about space”.
Here’s my diary of one of the most exciting 12 hours of my life!

Figure 1: The very first “pulse” of Sentinel-3B as she “called home” to ESOC via the Kiruna ground station. Credit: European Space Agency, 2018. 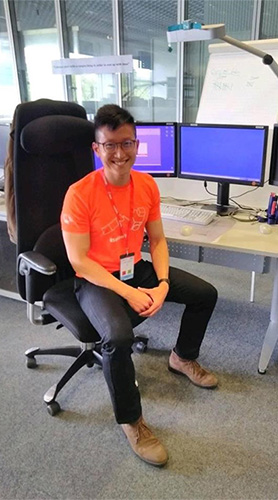 The day started off with a very warm welcome to ESOC by ESA staff who were very excited to receive us ‘Sentinerds’ at the venue to be a part of this Social Space event. I really had to up my tweeting game for this one!
As with any rocket launch, the schedule for the day was very tight. After a round of self-introductions by fellow event participants over lunch in the dining area, we were whisked away on a tour around the ESOC facility visiting the Dedicated Control Rooms (DCRs) of the various Earth observing and interplanetary missions including the Space Debris office. Of particular interest (and fascination!) was that of the famous comet-chasing spacecraft Rosetta and her lander, Philae. We were given a behind-the-scenes insight into how the spacecraft was built, tested and operated by ESA.
We were subsequently given a tour of the European Organisation for the Exploitation of Meteorological Satellites, better known to the world as EUMETSAT, operators of the Metop, Meteosat and Jason weather satellites.

Figure 2: At the seat where the very last command was sent to the Rosetta spacecraft before her plummet into comet 67-P’s icy surface, ending the 12-year mission. Notice Philae sitting on the overhanging lamp!

25 April 2018, 1400 CEST
Darmstadt, Germany
EUMETSAT
A short bus ride took us to EUMETSAT, where we were given talks by scientists from both EUMETSAT and Plymouth Marine Laboratory (PML). Both organisations work on a range of research topics and explained how both Sentinel-3A and B will work together to contribute to a more complete understanding of our planet’s “health and vital signs”.
Although it is ESA’s remit to build, launch and commission the spacecraft, the long-term operations are the responsibility of EUMETSAT, which includes activities such as spacecraft control and the subsequent dissemination of datasets for public use.
Another fantastic tour to visit the various control rooms and we were on our way back to ESOC for the main event of the day, the launch of Sentinel-3B! 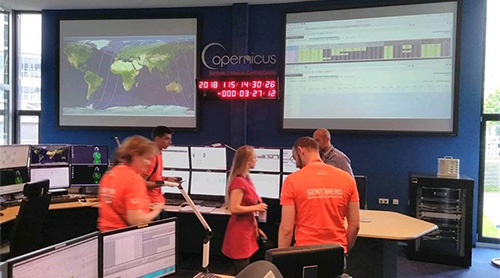 Figure 3: The Sentinel-3 Mission Control Centre at EUMETSAT where the long-term operations of the spacecraft will be conducted from. The countdown screen up on the wall shows 3hrs 27mins 12 seconds to launch! 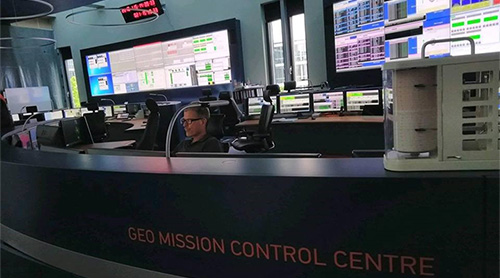 Figure 4: The Geo Control Centre where EUMETSAT’s geostationary satellites, such as Meteosat 8, 9, 10 and 11, are operated from. Being in the same location in orbit and providing an image every 15 minutes means weather forecasters can detect and forecast rapidly developing high impact weather, such as thunderstorms or fog, up to 6 hours ahead of time.

Having also performed decently well in a quiz that the ESA staff handed out enroute to EUMETSAT, I was one of 3 lucky participants granted access into the Mission Control Room (MCR) as they prepared for launch. Unlike everywhere else in the building, the MCR was very quiet, the silence occasionally interrupted only by the individuals engaged in the “go/no go” roll call, which just happened to be in progress whilst we were there. It was an eye-opening experience and certainly resembles what it is like on the big screens! Listen to the entire final roll call sequence here!

Having the opportunity to engage with the people behind the scenes of the Copernicus programme, I realised what an exciting time it is to be in Earth Observation.
Learning more about the Copernicus programme gave me an appreciation of how Earth-i, as a satellite operator and value-added services provider, complements these world-leading programmes happening in Europe under ESA’s leadership. 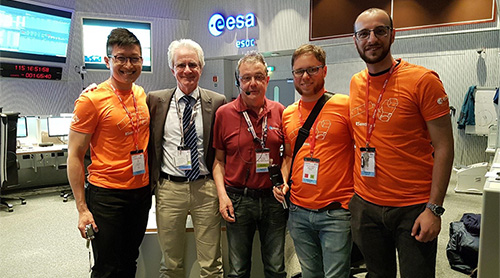 Figure 5: Myself and 2 other lucky participants of the Social Space event in the Mission Control Room with Head of Operations Dr Paolo Ferri (L) and Flight Director Pier Paolo Emanuelli (R).

25 April 2018, 1957 CEST
Darmstadt, Germany
Press Centre, European Space Operations Centre (ESOC)
We were all at the edge of our seats, our eyes glued to the screens showing the live stream of events from the launch site more than 3000 km away. A bright spark and ignition of the engines rapidly send the launcher roaring into space, piercing through the clouds and leaving a column of smoke in its wake. Minutes later the Rokot was in orbit, her fairings separated, exposing her precious cargo now in the vacuum of space. Within hours we received AoS and notification that her solar arrays were deployed.
Europe, we have a mission! 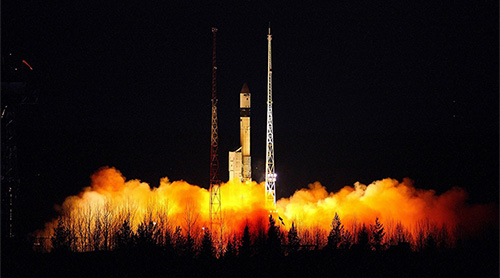