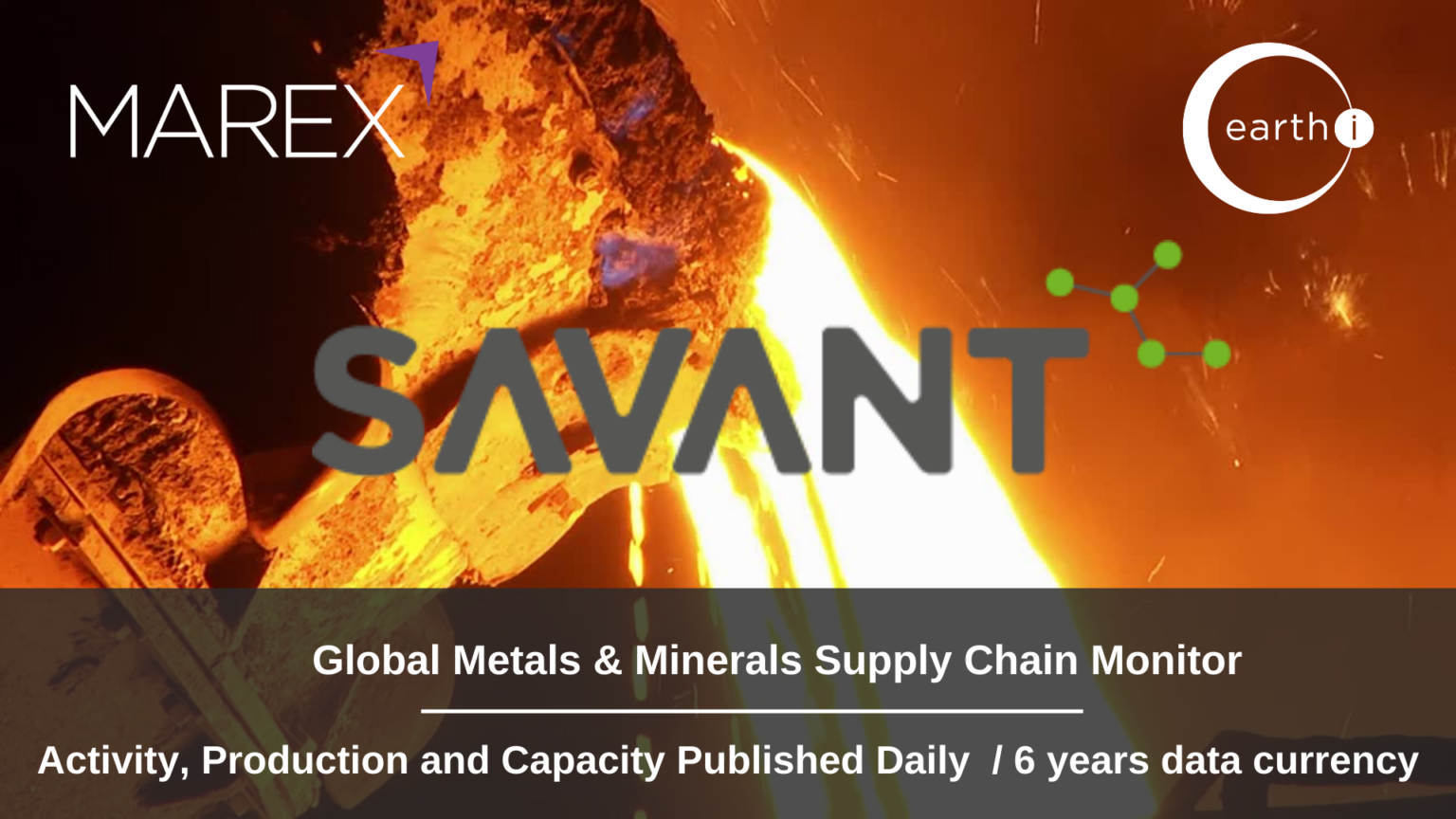 5 January 2022 – SAVANT, the unique geo-spatial analytics product launched in October 2019 by Earth-i and Marex, covers global smelting activity for both Copper and Nickel.

* Since Savant started recording data in 2016

Global smelting activity for 2022 fell to its lowest level in the six-year history of SAVANT data, registering a reading of 48.0 for the year in comparison to the two year average activity level of 50. This beat the previous low of 48.7 in 2018, reflecting a year not only dominated by extensive maintenance campaigns at major smelters, delayed due to COVID-19, but also operating issues at plants in Korea and Japan as well as an increase in observed smelting capacity by over half a million tonnes, to nearly 21.9Mt. The result was in large part due to weakness in smelting activity outside China. The World ex-China Dispersion Index fell to 47.4 for the year – again a new low from 48.0 in 2018 – as the Inactive Capacity Index set a record at an average of 17.5%, a full percentage point above the previous high of 2019. Conversely, in China the Dispersion Index averaged 48.9, up from 48.5 in 2021, while the Inactive Capacity Index set a new record low of 7.9%, beating the 8.1% seen in 2021.

In December the Global Dispersion Index fell to 48.0 from 48.9 in November as a number of smelters undertook maintenance. In China, Yunnan Tin’s 100kt/a Yunxi plant started an annual program at the beginning of the month, while those of similar capacity at Baotou and Yimen are also observed to be offline, and as Chinalco’s 400kt/a Southeast Copper (Ningde) halted operations in the last week of the month. Elsewhere, Codelco’s Chuquicamata smelter in Chile is not expected to resume until the end of Q1, while Zijin’s Bor smelter in Serbia is still inactive after commencing a major overhaul in April, subsequently hampered by delays and high energy prices. Smelting activity in Asia – which was the strongest region in 2022 – remained healthy at 55.3 for December, with all of the region’s 22 active smelters in operation at year end.

The Global Dispersion Index fell to 52.3 last month from 53.5 in November, led by a 5.7 point decline in NPI activity in Indonesia to 51.2. Looking at 2022 as a whole, Europe & Africa became the first region in the history of SAVANT data to record a higher Inactive Capacity reading than Dispersion Index for a calendar year, at 38.5 and 33.9 respectively, testament to the scale of disruption resulting from elevated energy prices in 2022. All of the region’s major ferronickel smelters were observed as inactive at year-end, with only matte-producing Boliden Harjavalta in Finland and the small ferroalloy plant at Treibach-Althofen in Austria in operation. NPI smelting activity in China strengthened to 54.6 in December as the Chinese government loosened COVID-19 restrictions in key producing provinces on the east coast, resulting in the highest reading in over six months on 13th December at 63.8. In a year that proved particularly disruptive for ferronickel smelters, December saw the metal grade index fall back to 43.3, as several operations that have struggled recently, including Doniambo in New Caledonia and Fenix in Guatemala, were observed to be operating below capacity.

Dr Guy Wolf, Marex Global Head of Analytics, commented: “2022 saw the continuation of a trend that has been evident in global smelting for some time now: namely, that ageing RoW capacity is being supplanted by more efficient, modern plants in China. Potentially the most important development for the next 18 months will be the delivery of processing capacity in Indonesia – while this will tighten the international concentrates market it will also reduce Freeport-McMoRan’s sales book, which will have implications for their role as the leader of benchmark negotiations from the miners’ side.”

The Activity Dispersion Index is a measure of capacity-weighted activity levels observed at smelter sites where a reading of 50 indicates that current activity levels are at average levels.  Readings above or below 50 indicate greater or lesser activity levels than average, respectively.  The above chart displays these readings as a weekly rolling average.

The Inactive Capacity Index is derived from binary observations of a smelter’s operational status as being either active or inactive. The capacity weighted global and regional indices show the percentage of smelter capacity that is inactive, with readings displayed in the chart below as a weekly rolling average.  A reading of zero would indicate 100% smelting capacity.

The SAVANT platform monitors up to 90% of the smelting capacity for copper and nickel round the globe. Using daily updated sources, including extensive use of geospatial data collected from satellites, the index reports on the activities at the world’s smelting plants offering subscribers unprecedented levels of coverage, accuracy and reliability. This dataset allows users to make better informed and more timely trading decisions.

Marex was established in 2005 but through its subsidiaries can trace its roots in the commodity markets back almost 100 years. Headquartered in London with 22 offices worldwide, the Group has over 1,300 employees across Europe, Asia and America.